You are using an out of date browser. It may not display this or other websites correctly.
You should upgrade or use an alternative browser.

For the first time in what feels like living memory, EA Sports appear to be making notable changes to Career Mode with FIFA 21 on PC, PS4 and Xbox One, with the Switch seemingly being left behind for another year and no news on what's in-store for next-gen FIFA yet. Alterations are being made to how you sign players, develop them and manage their schedules, and while not quite displaying the level of control over your squad that you’d see in perennial simulation Football Manager, these changes do seem like they’ll actually make a genuine difference to who the mode will be played. Let’s take a look at the major additions in some more detail: Interactive Match Sim A new way to play through a season in FIFA 21 that lands somewhere between playing through each match and using the instant result simulation option to skip through games you just don’t fancy playing. It’s presentation borrows heavily from the classic Football Manager viewpoint of bouncing circles shuffling around the pitch from a birds-eye view but on a gameplay level is much closer to the Play the Moments option found in the Madden games since Madden 17. [caption id="attachment_2384153" align="alignnone" width="900"] 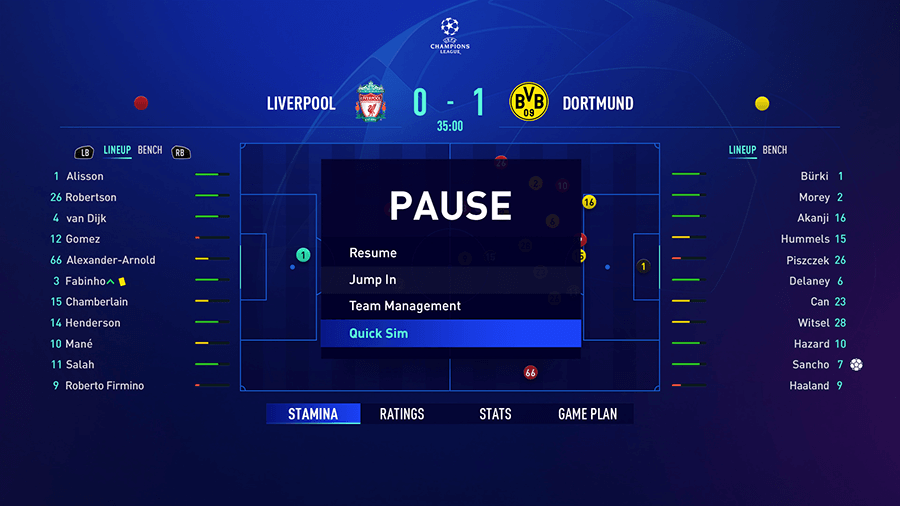 The new Interactive Match Sim view.[/caption] You’ll be able to watch your fixtures take place at an increased pace, but crucially can jump in at any moment during the match to take control of your players on the pitch. Whether this be as short a moment like attempting to score a crucial penalty, or a full half if your team is trailing after 45 minutes and the tide is in need of turning. There’s no limit to how many times you can seamlessly jump in and out of each viewpoint and should provide a new level of flexibility as to how you manage your fixtures. More Transfer Options New ways to sign players are being introduced. Loan to buy options with both optional and mandatory fees will be available, as well as these types of deal being initiated by AI managers. When you start a new career mode, new set-up options will also be available. Authentic transfer mode can be turned on, leading to tougher negotiations and less bizarre transfer dealings from other clubs. On the other end of the spectrum though, you can choose to start with a financial takeover to instantly boost your transfer funds and play more of a fantasy football style. Change Player Positions This is the most exciting new aspect to career mode in my eyes and should allow for new levels of variety when team-building. The way you develop individual players in your squad once you’ve signed them is also being overhauled. The new growth system will allow you to train players into learning new positions. By selecting their new position and monitoring their attribute changes in training you’ll be able to see how well they are adjusting and hopefully watch their stat numbers rise. There’s no guarantee of success though, the more the drastic the position change, the less chance of the player adopting it. You’ll likely have far more joy converting Raheem Sterling from a winger into a centre-forward due to his pace and finishing stats or Alexander-Arnold into a play-making midfielder than you would attempting to turn Neymar into a rock of a centre-back. It's this sort of experimentation that could lead to some fun results though. [widget path="global/article/imagegallery" parameters="albumSlug=fifa-21-13-new-images&captions=true"] Match Sharpness Match sharpness is a new attribute that indicates how likely your players are to perform in the most crucial moments of a game. You can increase your players’ sharpness by organising group training sessions that focus on specific situations. Want your forwards to put away their big chances? Do a finishing drill. Think you might be on the back foot in the next fixture? Focus on getting your defenders sharp in the training session beforehand. It's not quite clear how much of an impact match sharpness will have on the pitch yet, but adds another dynamic to take into account rather than just skipping through all training sessions to get to the next match. Schedule Planning You’ll now have more flexibility than ever before about what your squad does when not playing matches. Balancing rest days with training sessions will be key as you try and keep match fitness, sharpness and morale in perfect harmony. It will be an extra level of challenge on top of playing the actual matches that once again relates to the Football Manager series. It’s not got quite the level of depth to the systems found in Sports Interactive series but definitely is a step in the right direction of taking in account more of the aspects of a manager’s role. It will be intriguing to see if this system is genuinely useful, or just becomes an annoyance to manage over time as the inevitable fixture pile-up occurs. [ignvideo url="https://www.ign.com/videos/fifa-21-official-gameplay-trailer"] While I can see myself using the new interactive match sim option intermittently and having a lot of fun messing with players positions and developing them, career mode maybe isn't get the complete overhaul that FIFA fans have been wishing for quite some time now. Nonetheless, I'm excited to get my hands on it for myself and see just how much these changes will affect how I approach the mode. What changes are looking forward to, and what features would you like to see added to career mode in the future? Let us know in the comments below! [poilib element="accentDivider"] Simon Cardy loves everything about football despite being regularly tortured by his Tottenham Hotspur season ticket. Send old Gareth Bale goals to him on Twitter at @CardySimon.